It’s easy to believe that many Instagram and TikTok influencers and content creators have a perfect life, but Jaclyn Singletary Gibson admits that there’s no such thing.

“Perfection is an unrealistic expectation,” she says. “But a lot of people on social media are trying to portray this perfect life that just does not exist and isn’t achievable for anyone.”

Her images and videos are both relatable and vulnerable, showing her as a devoted wife and mother who is willing to tackle tough issues that today’s women all face. “My goal has always been to share openly,” Gibson says, “especially about things that are tough to talk about – sex, conflict, finances, and relationships in general.”

Her following of 250k+ on Instagram and 79k+ on TikTok shows that people gravitate toward her realness, openness, and willingness to be vulnerable about all aspects of her life. Gibson strives for authenticity in what she describes as “a space filled with a lot of fake!”

Reaching Out to All Women

Jaclyn has always sought to connect with all women. “My content is for everyone,” she shares, “and it’s based on the sometimes not-so-fun reality and depths of marriage and motherhood.”

Her content includes humor, the ups and downs of being a parent, and even fashion advice and style inspiration for the everyday woman. Gibson has gained a large following for being someone who says what we’re all thinking: “I talk about things that not everyone loves to discuss but that we’re all going through,” she says.

Gibson strives to be an example of someone secure in herself, someone unafraid of being honest about life’s hardships. She feels strongly that women should feel free to be themselves: “You don’t have to look and act and dress and talk like everyone else,” she insists. “Who are you? Look inward and know yourself so you can be confident showcasing your true self to the world.”

She leads by example, posting content about things that most are afraid to share. She shares makeup struggles and successes, her favorite morning routines, how she hates wearing bras, and her adventures in different hair colors. She wears what she wants, says what she feels, and isn’t worried about looking or seeming a certain way.

“There’s no such thing as perfect,” she laughs. “Imperfection is perfect.”

More of Him, Less of Me 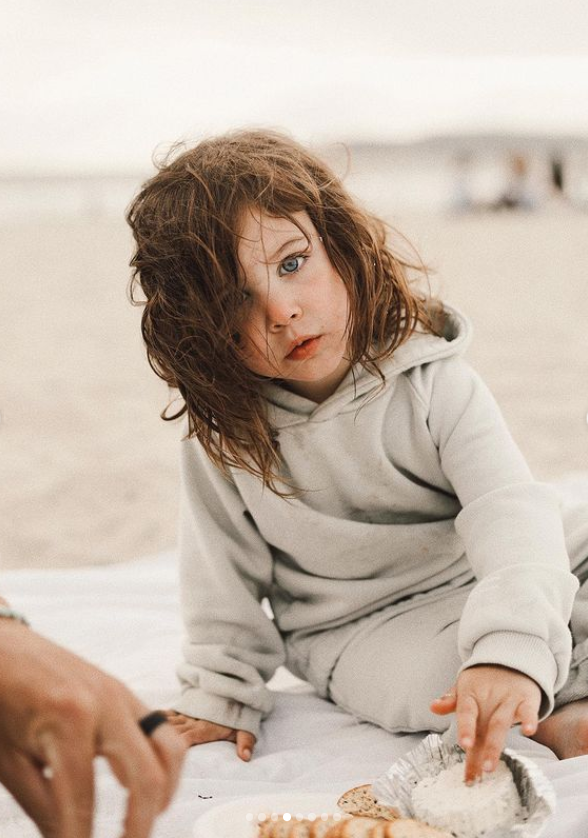 She talks about her faith, the power of prayer, and the importance of creating a strong emotional bond when it comes to marriage and motherhood. “I always want to be as real and open as possible,” Gibson states. “I want to always remind women that whatever you’re facing, whether it’s body issues, marriage problems, parenting difficulties – you aren’t the only one, and you are not alone.”

Her tagline on Instagram states, “More of Him, less of me”, pointing toward the faith that has carried her throughout the hardest times in her life. She realizes that she might lose certain followers because of being open with her faith, but that doesn’t stop her. “Everything I have is from God,” she says. “I’m not going to deny Him.”

She points to family prayer as a key component in a successful relationship. “We don’t speak the d-word,” she says, referring to divorce. “The family that prays together stays together!”

From Disappointment to Dreams Fulfilled

When asked about the challenges she’s faced, Jaclyn says, “I am not scared to talk about the ins and outs of my marriage. And people are always going to have their say. There are negative comments. But I’m not going to stop being who I am.”

She’s also talked about the financial struggles she and her husband Seth have faced. “We had moved to Dallas with the promise of my husband’s new job,” she shares. “He was coaching football in a spring league, but when the league folded, the job was gone – and we were faced with some hard choices.”

That’s when she became a content creator. “I didn’t want my husband stuck in a job he hated. I knew I could do this. It’s been a hard road but we’re finally seeing the light at the end of the tunnel.”

Her goal is to continue to reach young women and as her follow count grows, more and more people are being touched by her heartfelt stories. She’s passionate about women being the best versions of themselves for their families, spouses, kids, and themselves. “I want to let women know that they are worth the dream life that they can’t stop picturing,” she says, “whatever that might look like for them. I do want to relate that it takes hard work, sacrifice, and not giving into societal norms.”

In type Jaclyn-style real talk, she shares her ideals about success: “Success is not a destination. It’s not financial. Success is caring more about what you think of yourself than about what others think of you. Every single day we have the choice to live with intention. If you end each day proud of what you accomplished or how you grew, that’s success.”

Mark Julian is the Model for Success and the Leader to Follow
Business, Celebrity
filter_none